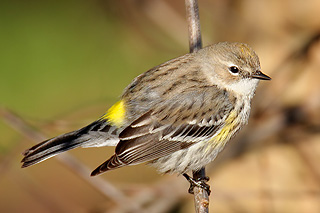 Common as pig tracks down here on the Gulf Coast each winter, the Yellow-rumped Warbler announces its presence with a dull, unemphatic "chip" call note, uttered almost ceasessly -- after a winter's worth of hearing a few thousand of these birds, come March or April, most birders are (secretly) glad to see them go . . . (photo by Russ Norwood  www.perceptivist.com)

Through sheer geographical happenstance, Louisiana is a fantastic place for winter birding. Situated alongside the mitigating warmth of the Gulf of Mexico, and possessing water-rich landscapes, we remain chock-full of all sorts of tasty food items (berries & seeds, insects & other invertebrates, crustaceans, mollusks, fishes, small mammals, etc.) throughout the winter months. Too, our position midway between eastern and western North America results in receiving migrants from not only the middle of the continent, but also from both ends.


So all this sets the stage nicely for a big ol' wad of winter birdlife here each winter. To start, we have our own compliment of local year-round birds like herons, egrets, ibises, raptors, woodpeckers, and songbirds present in all seasons including, of course, winter. Then we have a whole 'nother group of waterfowl, raptors, shorebirds, songbirds, etc. that nest far to our north and migrate south to spend the winters here along the Gulf Coast with us. These, we refer to as nearctic migrants.

Next, we have a group of birds which regularly nest here each summer and migrate still further south into the tropics each winter. These, we call neotropical migrants. With some species of neotrops, we always get a few individuals who regularly overwinter as far north as the coastal counties and parishes here along northern rim of the Gulf of Mexico; and a few others, which, for reasons unknown, remain here, choosing not to migrate to their respective species' usual wintering grounds to our south. These, we call “lingerers.” Lastly, we annually host a group of migratory birds native to both the east and west coasts of the U.S. who get blown off course and simply end up here instead of their usual wintering grounds. These we call “vagrants” (personally, I prefer the term, “waifs”...but hey....). Obviously, this one would be the most exciting category from a bird watching perspective.

Down here in south Louisiana experienced birders can amass daily species lists of 100+ species without too much difficulty on most any given winter day.

Recently I've been pondering the fine compliment of winter warblers that we entertain (or is it the other way around?) down here on an annual basis. Normally, we North Americans associate warblers with bright colors and sweet songs against the leafy backdrops of the spring and summer seasons. Yet, right off the top of my head, I came up with at least 20 species of warblers that I've personally seen down here in midwinter; not too bad, considering that there are 53 total wood warbler species native to the U.S. and Canada. Of course winter warblers wear dull non-breeding plumages, so the “visual” component is not as breath-taking as during spring and summer, but they're quite fun to watch and hear all the same.

In the common regularly-occurring nearctic migrant category, the list begins with the Yellow-rumped Warbler, by far the most ubiquitously abundant of all our winter warblers. Yellow-rumpeds can be found everywhere down here, from sparsely-landscaped urban/suburban parking lots to deep cypress-tupelo swamps and everywhere inbetween – just as long as at least one tree is present. 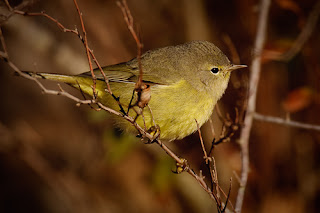 the Orange-crowned Warbler is about as dull as it gets -- to the point where no discernable field marks becomes a field mark itself....these skulkers often emit a squeaky but sharply-penetrating series of "Chit!" notes upon detecting your presence . . . (photo by Russ Norwood)

Of regular occurrence as well – and almost as ubiquitously distributed as the Yellow-rumped, is the Orange-crowned Warbler. This species is nowhere near as abundant as the Yellow-rumped, but it does inhabit the same array of situations, but usually working lower among the shrubs and the low branches of trees. 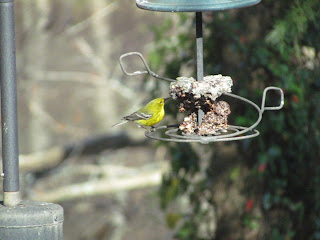 two white wing-bars, a thin eye-ring, vaguely-streaky sides, and a high-pitched, flat-but-musical "chip" note equal Pine Warbler . . . this one is a very bright male, whereas the plumage of females and immatures is dull brownish, featuring little if any yellow . . . (photo by Larry Amy)

The Pine Warbler is another winter species down here that occupies the same urban/suburban/rural/wild array of wooded settings as the abovementioned. Pine Warblers are the only warblers that regularly visit seed feeders (especially those equipped with suet, “peanut butter logs,” and other sticky, nutty things). 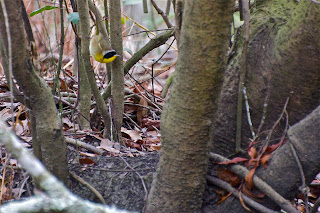 lil' bandit! . . . females and immatures lack the white-lined black mask of this adult male Common Yellowthroat; and they can be sometimes difficult to identify . . . the lanky, round-tipped tail on all ages and sexes is a dead giveaway, though . . . (photo by Matt Conn)

Another common nearctic warbler overwintering here is the Common Yellowthroat. We have our own year-round population of Common Yellowthroats, but each winter these are joined by massive numbers from our north. You've got to go to a fairly wild spot to see this species – the open brushy edges of lakes and streams, marshes, rice fields, and overgrown fields are perfect places to look.

And then we've got the Palm Warbler (have a look at Matt Conn's fine profile photos of this species on my facebook version of The Nature Dude); not quite as commonly encountered as the others, but if you know where to look (the same dense, shrubby, overgrown fields that the Common Yellowthroat likes) you can generally find a few. Though pretty common here, Palm Warbler is frequently missed altogether during some area Christmas Bird Counts, which feature intensive bird surveillance in given areas by numerous observers. 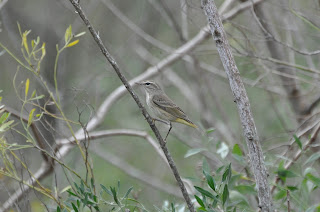 drab winter dress of the "western type" Palm Warbler -- the form that we usually encounter here in south Louisiana . . . "eyebrow," yellow undertail, and a constantly-wagging/pumping tail are things to look for . . . go to my facebook "short notes" version of The Nature Dude to see a pic of the brighter more yellowish "eastern type" . . . (photo by Matt Conn)


Things get a little more exciting with the next category – warblers which regularly overwinter down here in the coastal zone, but in relatively small numbers. Again, entire Christmas Bird Count areas (15-mile diameter circles), often fail to turn up even one of these species; so it's a big deal any time you see one. Included in this group is the woodpecker-like Black-and-White Warbler, and the pretty yellow Wilson's (see Matt Conn's Wilson's Warbler photo on my facebook version of The Nature Dude) and Prairie warblers. In the world of North American winter birds, the color yellow comes at a premium. So anytime a winter birder spies any sort of yellow bird, we immediately know that we've got something good . All three of these species are fairly shy, only popping into view – if you're lucky enough to find one in the first place – for very brief periods of time.

Last comes the most exciting category of all – the lingerers & waifs. Encountering one of these is always a big surprise, more so for a waif than a lingerer, but either one or the other will make a birder's day. Of the lingerers, I have wonderful memories of finding things like Ovenbird, Yellow-throated Warbler, Nashville Warbler, Northern Parula, and Yellow-breasted Chat. I can remember when, where, and with whom I was with in each case. Most of these instances were during Christmas Bird Counts, where the hardest of hard-core birding is the rule, and everybody's working pretty hard for 8-12 or more hours at a time. 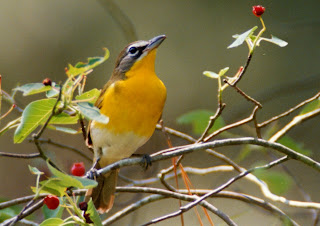 the few Yellow-breasted Chats that i've encountered in south Louisiana winters have all been tucked deeply under Japanese honeysuckle thickets in very secluded areas...chats are large thicket-dwelling warblers...fortunately they retain their bright yellow underparts in winter, so when they briefly flash up from their hiding places, they're pretty easy to identify.... (photo by Rector Hobgood[?]....either him or Beth Erwin)

I can still vividly remember even the tiniest of details regarding the waifs that we've encountered – even many many years after the fact. I oftentimes of wish that I could remember meeting people in that way, but hey . . .

All of my winter waif warbler encounters down here in the Louisiana coastal zone were of western U.S. species – lost birds who were attracted to the relatively few tiny groves of oaks spread out through thousands of square miles of marshes and ricefields. In such a landscape, evergreen live oaks stand out like beacons amidst the surrounding grassy/watery gray/brown countryside. Coming to mind are two Townsend's Warblers; one at an old oak-studded homesite (house was long gone...) in the middle of the ricefields south of Welsh, LA in Jeff Davis parish, and a second in a fairly large oak grove at – where else?-- Oak Grove, LA in Cameron parish. And then a couple of Black-throated Gray Warbler memories from small chenieres (French for “oak grove”) like the Peveto Woods Sanctuary, nearly right on the beach just east of Johnson's Bayou, LA in western Cameron parish.

And then there are true biggies – of birds rarely encountered anywhere east of the 100th meridian – say the Trans-Pecos of Texas – birds like the Painted Redstart that two other guys had found in a woodlot in northern Cameron parish during a Sabine NWR Christmas Bird Count. Back then, there were no cell phones. Good thing; else ALL bird counters would have immediately abandoned their designated areas to chase that bird. So we did it the old-fashioned way, hearing the news that evening during the count compilation in a Cameron restaurant, and going out the next day to relocate it. Oh but that was a rare one, ya'll . . . if you've never seen one, go ahead and google it . . .﻿
Posted by bill fontenot at 7:41 AM