sittin' in the pass of the bay 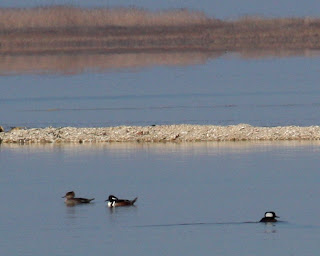 Hooded Mergansers -- gorgeous fish-eating ducks -- at Southwest Pass
January 26 dawned at a chilly (for us) 34F and a light north wind; but by the time we reached the Cypremort Point boat launch a couple of hours later, it had warmed considerably and it was nearly dead calm. The wind didn't know which way to blow.


Dave Patton and I have been watching birds together for about 25 years. By now, there ain't no more secrets to tell, so we mainly just enjoy each other's company. We don't get together as much as we used to, but we both hope that'll change soon. In fact, we're trying to do something about that today.

“More fishing” is definitely on my bucket list these days; and thanx to the influence of a mutual birding friend, Dave's thinking that way too. Dave's got a nice boat.

So he called me on the 25th wondering if i'd care to go fishing/birding down in Vermilion Bay. Oh yeah.

First thing, we putt through Shark Island and up to Mud Point and the infamous fishing hotspot called “the Trash Pile” in neaby Weeks Bay. My buddy Mark Manuel recently gave me a fine redfish/speckled trout rod that he built, and I went out and bought a cheap reel for it. I was hot to try it out, and the Trash Pile would be the perfect spot. 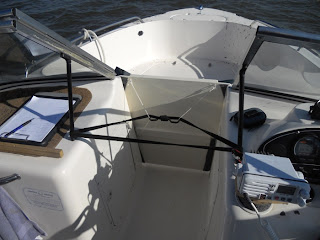 Dave, on the other hand, had recently constructed a “leg shield” for his boat: a contraption devised to block the wind from coming in down under the windshield on his open-bowed bay boat.

We tested away and were happy with the results. But, alas, Weeks Bay was so damn birdless (and fishless) that it threatened to depress us both – on a perfectly beautiful day to be out on the water, no less. So by noon or so we're heading back east toward Cypremort Point and Dave's looking longingly at Vermilion Bay, to our south. To our amazement, the water was totally slick – smooth as glass – like some sort of glacial lake up in Canada, you know? Rarely does one get a chance to boat in such conditions along our coast. So Dave asks me if I felt like a ride to Southwest Pass – a 12 mile ride down to the foot of Vermilion Bay. I look at the water and go “yeah!”

The lower end of Vermilion Bay is blocked off from the Gulf of Mexico by Marsh Island. Marsh Island, a large barrier island, is aproned to the south and west with oyster reefs – miles of 'em. South of there, it's open Gulf.

Strange thing is that Vermilion Bay, like most bays in coastal Louisiana, probably averages no more than 5-feet in depth; and the open Gulf of Mexico to the immediate south of Marsh Island is proabably no more than 8-12-feet in depth. But the narrow cut between Marsh Island and the mainland of Vermilion parish – a cut known as Southwest Pass – is some 70-feet deep(!), literally carved through solid oyster reef via 10,000 years of strong tidal action between Vermilion Bay and the Gulf of Mexico.

En route to the pass, we decided that we ought to put in some Louisiana Winter Bird Atlas time in there, since the atlas season was on, and virtually no one birded Hellhole Bayou, the quad that contains Southwest Pass. Hellhole Bayou was data-starved, and we intended to rectify the situation. 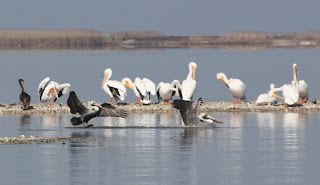 Brown Pelicans sliding home....Safe!.....while the other team (American White Pelicans) yawns in astonishment.
Reaching Southwest Pass by about 1pm, we saw quite a few cormorants, pelicans, ducks, shorebirds, and what-have-you lolly-gagging around, on, and behind the reefs on both sides of the pass. Dave cut the engine, and we were immediately engulfed in this warm, sunny, near-perfectly calm setting. 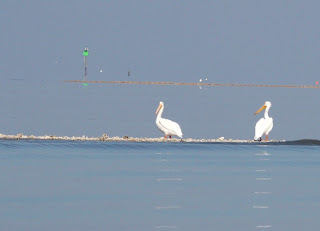 The Scene....were it not for the bits of exposed reef, birds, etc., would you know which way was up?
So nearly identical were sky and sea in color, texture, and temprement that all seemed to coalesce into One, leaving us with the feeling of being eerily suspended somewhere Within. 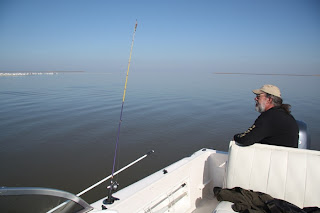 Suspended Somewhere Within...with my new pole/reel...i didn't know which way to throw it at the time.....As Captain Beefheart once exclaimed, "Do it start at the bottom, or do it start at the top?"
It's a hard thing to describe, I know; but certainly worth reporting. In fact, the only other time I've had that feeling was with Dave, on a Christmas Bird Count at Lacassine-Thornwell there in southern Jeff Davis parish. That day, it was the fog that disoriented – or more properly, misoriented us. That day, the heavily overcast sky merged with the fog and with the shallow water of a ricefield that stretched out before us for a half-mile or so. Suddenly we felt like we were floating somewhere Within. I remember the only way that I could gain some semblance of orientation was to look straight down at my feet anchored to the gravel road below....and even that short of a space was foggy! 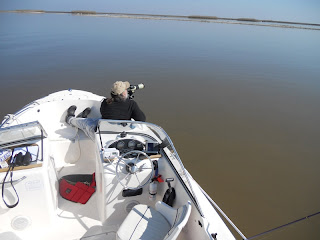 Counting Green-winged Teal and Black-bellied Plovers behind a distant reef.
Necessity = Mutha of Invention
So calm was Southwest Pass that we found we could even operate a spotting scope from the boat! Of course we had earlier talked ourselves out of bringing along a tripod, reasoning that only an idiot would even attempt to scope birds from a pitching boat. But Dave did manage to bring his spotting scope in his camera bag, and necessity being the mutha of invention and all, we rigged an acceptable spotting scope mount using Dave's handy-dandy “leg-shield” anchored with bungie-cord onto his boat's bow rail.
Posted by bill fontenot at 4:29 PM 1 comment: Links to this post